What is an Instrumentation Amplifier? Definition, working, and advantages

There are three operational amplifiers in the circuit of an Instrumentation Amplifier. The input of the differential amplifier is a non-inverting amplifier. For exact measurement of each input data from transduces this circuit provides high input impedance. The basic circuit for instrumentation amplifiers is shown.

Let us consider  Vo1 and Vo2 the output voltages of the two op-amps 1 and 2 respectively. Then the value of  voltage Vout of difference amplifier is

The value of voltages Vo1 and Vo2 is in terms of the input voltages and resistances. The input stage of the instrumentation amplifier is also shown below. 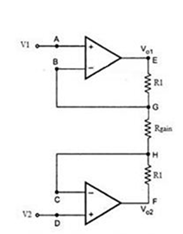 Consider the value of input voltage as V1 at node A. From the virtual ground concept, the value of the voltage at node B will be V1 . At node G the potential will also be equal to V1 .

Consider the value of input voltage as V2 at node D. From the virtual ground concept the value of the voltage at node C will be V2 . At node H the potential will also be equal to V2 .

At node E and F from Ohm’s Law, we can write

As there is no input current at the input stage hence, value of current between node G and H will be

Equating both equations 1 and 2,

The output of the difference amplifier is

The output voltage of an instrumentation amplifier is in the above equation. The value of the overall gain of the amplifier is (R3/R2) {(2R1+Rgain)/Rgain}.

What is a Crystal Oscillator? An important topic for exams

What is the World Wide Web?

What is the Wein bridge oscillator?

What is a DC  Potentiometer?