What is a Watchdog Timer?

Watchdog timer is a hardware microcontroller. It is basically used to take out a system from an infinite loop and resets the system. Watchdog makes the embedded systems more reliable as it works as a safety mechanism.

Watchdog is a type of counter. It is an up counter which means that it counts from zero and reaches to some values. As soon the watchdog timer reaches some value its hardware generates a watchdog reset. Then the system resets this count value to zero in order to avoid system reset. The watchdog timer is loaded with some values which are based on its timeout time. The system needs to reset the counter before timeout.

The figure below is of watchdog time hardware with input as clock. With every clock the internal counter increments. Then the comparator will compare this value with the loaded count value. Then if the comparator finds that count value matches the watchdog hardware generates and resets it. 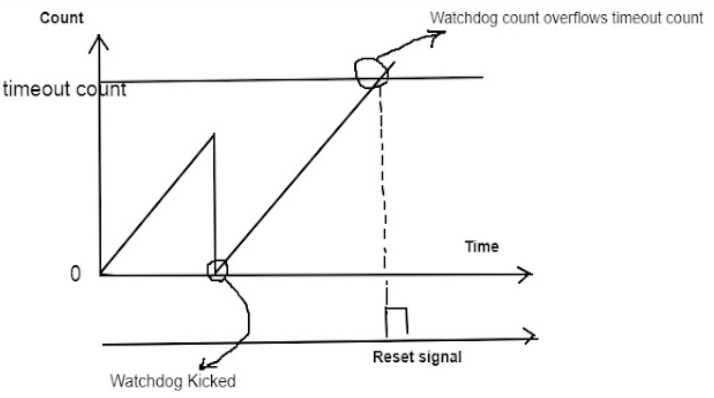 The internal watchdog of the MSP430 family is used either as a simple timer or as a watchdog that ensures system integrity. The watchdog function is enabled after power-on reset or system reset. In case of any difficulties after start-up of MSP430, the watchdog will reset the system as often as it is needed for it to start successfully.

A system running with MCLK = 3 MHz uses the watchdog for supervision of three functions.

Function 3 — A check is made if this interrupt handler is called regularly.

Each supervised function sets a dedicated bit in RAM byte WDB in intervals less than 10.66 ms (power-up value of the watchdog with MCLK = 3 MHz) if everything is functioning normally.

The main loop checks this byte (WDB) and resets the watchdog ONLY if all three bits are set (07h). If one of the functions fails, the watchdog is not reset and will therefore reset the system.

What is a Co-operative Bank?

What is Bravais Lattice?