What are the properties of Laser?

LASER stands for “Light Amplification by Stimulated Emission of Radiation”. Properties of Laser are explained below.

The laser light exhibits some peculiar properties compared with the conventional light which make it unique. Let us study the factors that make laser light stand out. These are

Monochromatic light is a light containing a single colour or wavelength. The light emitted from ordinary light sources have different energies, frequencies, wavelengths, or colors. But laser light has a single wavelength or colour.

A predictable correlation of the amplitude and phase at any one point with another point is called coherence.That means if two or more waves of same frequency are in the same phase or have constant phase difference then these waves are said to be coherent in nature. 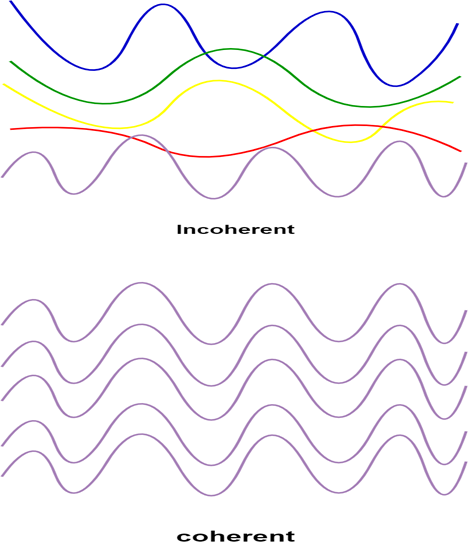 Where r1 and r2 are the radii of laser beam spots at distances of D1 and D2 respectively from the laser source.

Laser light is highly intense than conventional light. We know that the intensity of a wave is the energy per unit time flowing through a specific area. A one mill watt He-Ne laser is more intense than the sun intensity. This is because of the coherence and directionality of the laser.

Suppose when two photons each of amplitude a are in phase with another, then young’s principle of superposition, the resultant amplitude of two photons is 2a and the intensity is 4a2. Since in laser many numbers of photons are in phase with each other, the amplitude of the resulting wave becomes na and hence the intensity of the laser is proportional to n2a2. So the 1mW He-Ne laser is more intense than the sun.

What is Lorentz Transformation?

What is the difference between Stress and Strain?

What is LASER and its properties?

What is Pumping and its types?