Back to Study material
ECA

The phase of an alternating quantity at any instant in time can be represented by a phasor diagram,

Therefore, phasor diagrams can be thought of as “functions of time”.

A complete sine wave can be constructed by a single vector rotating at an angular velocity of ω = 2πƒ, where ƒ is the frequency of the waveform. Then a Phasor is a quantity that has both “Magnitude” and “Direction”.

As the single vector rotates in an anti-clockwise direction, its tip at point A will rotate one complete revolution of 360o or 2π representing one complete cycle.

If the length of its moving tip is transferred at different angular intervals in time to a graph as shown above, a sinusoidal waveform would be drawn starting at the left with zero time.

Each position along the horizontal axis indicates the time that has elapsed since zero-time, t = 0.

When the vector is horizontal the tip of the vector represents the angles at 0o, 180o and at 360o.

Hence, a phasor represents scaled voltage or current value of a rotating vector which is “frozen” at some point in time, t.

Sometimes when analysing alternating waveforms we  need to know the position of the phasor, representing the Alternating Quantity at some particular instant in time especially when we want to compare two different waveforms on the same axis.

For example, voltage and current. We have assumed in the waveform above that the waveform starts at time t = 0 with a corresponding phase angle in either degrees or radians.

But if a second waveform starts to the left or to the right of this zero point or we want to represent in phasor notation the relationship between the two waveforms then we need to take into account the phase difference, Φ of the waveform.

Consider the diagram as shown below

The generalised mathematical expression to define these two sinusoidal quantities will be written as:

The current, i is lagging the voltage, v by angle Φ. So, the difference between the two phasors representing the two sinusoidal quantities is angle Φ . 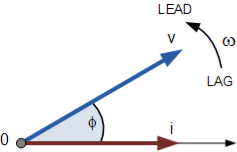 If however, the waveforms are frozen at time, t = 30o, the corresponding phasor diagram would look like the one shown below. Once again, the current phasor lags behind the voltage phasor as the two waveforms are of the same frequency.

When a circuit consist of Resistance and Inductance reactance in series is considered as shown below. 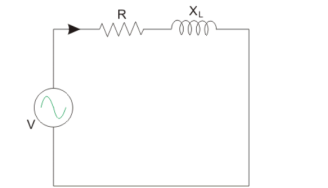 The circuit consist of Resistance and Capacitive reactance in series is considered as shown below. 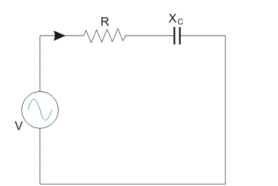 Bc = Capacitive susceptance in mho.

A sinewave is defined by the trigonometric sine function. The waveform repeats every 2p radians and is symmetrical about the voltage axis. The voltage and current exhibit cyclic behaviour referred as alternating current. The equation is represented as :

There are several ways in which the amplitude of the sinewave is referenced say peak voltage, peak-to-peak voltage, average voltage, and root mean square voltage. 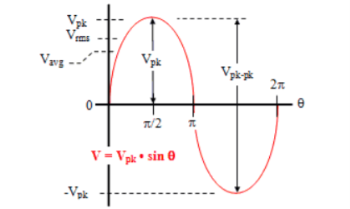 Vavg is calculated by taking the average of the voltage in appropriate chosen interval. For the first quarter cycle that is 0 to π/2 radians.

As the name implies, Vrms is calculated by taking the square root of the mean average of the square of the voltage in an appropriately chosen interval. 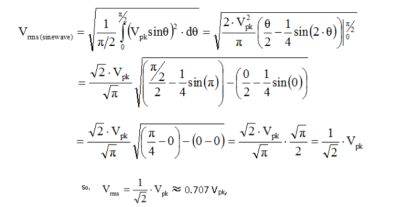 For a sinusoidal signal of peak voltage Vm it is given by :

It is defined as the ratio of maximum value to the R.M.S value of an alternating quantity.

As the instantaneous power is the power at any instant of time, then:

Where V and I are the root-mean-squared values of sinusoidal waveforms.

It is the product of the rms voltage phasor and the complex conjugate of the rms current phasor. 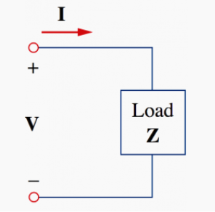 The voltage and current phasor

Given the phasor form V = Vm< Ɵv and I = Im<Ɵi of voltage v(t) and current i(t) the complex power S absorbed by the AC load is the product of the voltage and the complex conjugate of the current.

The load impedance Z may be written as:

In three phase circuit, connections can be given in two types:

In star connection, there is four wire, three wires are phase wire and fourth is neutral which is taken from the star point. Star connection is preferred for long distance power transmission because it is having the neutral point. 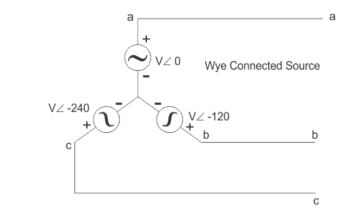 Ephase and I line = I phase

In delta connection, there is three wires alone and no neutral terminal is taken. Normally delta connection is preferred for short distance due to the problem of unbalanced current in the circuit. The figure is shown below for delta connection. In the load station, ground can be used as neutral path if required. 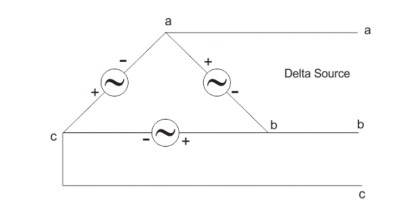 In delta connection, the line voltage is the same as that of phase voltage. And the line current is √3 times of phase current. It is shown as expression below,

An electric circuit is said to be a coupled circuit when there exists a mutual inductance between the coils or inductors present in the circuit. Coil is nothing but the series combination of resistor and inductor. In the absence of resistor, coil becomes inductor.

Let coil1 has N1 turns, while coil 2 has N2 turns. The current flowing through coil 1 is i1. Due to this current, the flux produced in coil 1 is Φ1. The part of this flux links with coil 2. This flux is called mutual flux.

It is denoted by Φ21 a sit  is a part of flux Φ1 linking with coil 2. When current through coil 1 changes, the flux produced in coil 1 i.e. Φ1 changes. Thus, flux associated with coil 2 i.e. Φ21 changes. So according to the Faraday’s law, there will be induced e.m.f. In coil 2.

According to Faraday’s law, the magnitude of the induced e.m.f. Is given by,

If the permeability of the surroundings is assumed constant, then Φ21 α    i1 and hence Φ21/i is constant.

Putting value of dΦ21/dt in equation (1), the magnitude of the induced e.m.f. Can be written by as,

Here the constant term (N2 Φ21/i1)is defined as coefficient of mutual inductance and it is denoted by M.

Then equation (3) can be written as,

Thus equation (5) indicates the magnitude of the e.m.f. Induced in coil 2 as a function of change in current in coil 1.

Dot convention is a technique, which gives the details about voltage polarity at the dotted terminal. While writing KVL equations.

We can classify coupling into the following two categories.

Electrical coupling occurs, when there exists a physical connection between two coils or inductors. This coupling can be of either aiding type or opposing type. It is based on whether the current enters at the dotted terminal or leaves from the dotted terminal.

Consider the following electric circuit, which is having two inductors that are connected in series. 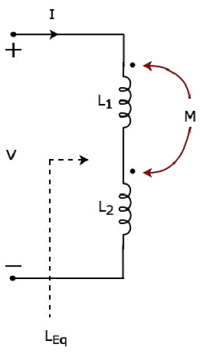 Since the two inductors are connected in series, the same current I flow through both inductors having self-inductances L1 and L2.

Apply KVL around the loop of the above electric circuit or network.

The above equation is of the form:

Therefore, the equivalent inductance of series combination of inductors

Consider the following electric circuit, which is having two inductors that are connected in series.

Apply KVL around the loop of the above electric circuit or network.

Magnetic coupling occurs, when there is no physical connection between two coils (or inductors). This coupling can be of either aiding type or opposing type. It is based on whether the current enters at the dotted terminal or leaves from the dotted terminal.

Consider the following electrical equivalent circuit of transformer. It is having two coils, and these are called as primary and secondary coils. 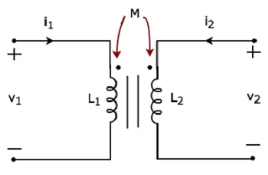 In Equation 1 and Equation 2, the self-induced voltage and mutually induced voltage have the same polarity. Hence, the above transformer circuit is an example of magnetic coupling, which is of aiding type. 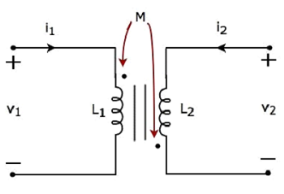 Apply KVL around the secondary coil

In Equation 3 and Equation 4, self-induced voltage and mutually induced voltage are having opposite polarity. Hence, the above transformer circuit is an example of magnetic coupling, which is of opposing type.

Ideal transformer can be defined as the transformer which id free of all types of losses. It is an imaginary transformer that has no core loss, no ohmic resistance and no leakage flux. It has the following characteristic:

The transformation ratio is given by 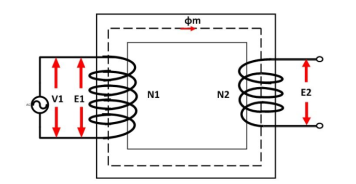 The flux link with the primary winding induces the emf E1 because of self-induction. The direction of the induced emf is inversely proportional to the applied voltage V1. The emf E2 induces in the secondary winding of the transformer because of mutual induction. 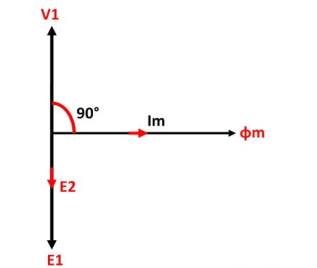 The phasor diagram of the ideal transformer is shown in the figure. As the coil of the primary transformer is purely inductive the magnetizing current induces in the transformer lag 90º by the input voltage V1.

The E1 and E2 are the emf induced in the primary and secondary winding of the transformer. The direction of the induced emf inversely proportional to the applied voltage.